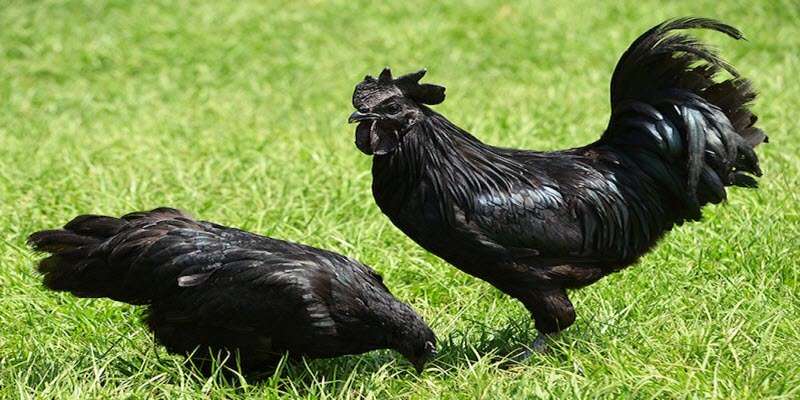 Kadaknath breed’s cock has remained the subject of discussion, for some time. Many people are rearing this breed of chicken, but still there are many people who do not even know what this Kadaknath breed in real is. Kadaknath is a breed of Madhya Pradesh. For the ownership possession of this breed, both Chhattisgarh and Madhya Pradesh fought legal case in the court, but Madhya Pradesh won the case due to which, now Kadaknath is the pure breed of Madhya Pradesh. Many people say that its blood is black and eggs are also black, but this is not true. Its skin is black shiny, the crest is black and its beak and tongue are also black. Eggs are like desi eggs and blood is slightly darker than red.
Some people say that it is difficult to clean it for meat and it cannot be cut easily, and to remove its hair it has to be thrown alive in boiling water just to bring down the hair. But this is not true. Its egg contains high amount of protein and low fat content. It is also beneficial for sugar patients. Its meat rate is up to 800 rupees and if small children are especially ordered from Madhya Pradesh then it will cost you 90-100 rupees per child. Its egg are sold up to 45-50 rupees per piece. For a child up to 3 months, the cost is 150 rupees and when the chicks grow up then it gives income up to 1500 rupees. Its feed is same as given to the broiler and you can also add spinach in its feed, as it contains iron which is beneficial for it.

What is the truth of Contract Companies?

There are many Kadaknath Chickens farms in Madhya Pradesh and that’s why many companies also do contract with them and now these companies are also moving towards Punjab. The first thing to think about is that if these companies provide us an egg at 35 rupees then how they will purchase the egg at 50 rupees per piece. So, before buying the chicks must have all the information, because some frauds are cheating people by cross breeding local broiler chickens with Kadaknath. And this trickery comes in notice after two months when the crest of the chick start coming. Crest of cross breed chicks are red in color and these chicks are not pure Kadaknath breed. So must check this.

There is no as such big market for the marketing of Kadaknath because generally people don’t like to eat black meat. But on a small scale some farms are making profits with the help of social media by buying chicks and eggs from Madhya Pradesh, and now its marketing is slowly expanding in Punjab also. If you are running a poultry farm and have good links with people around you, then you can succeed in this business.