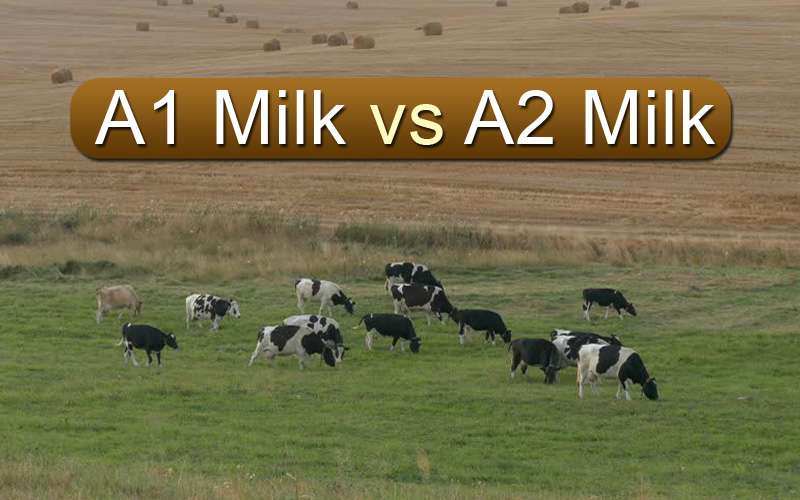 Everyone has heard about cow milk, buffalo milk, goat milk…. But do you know what is A1 milk and A2 milk? Well, don’t know of the common people but most of the dairy farmers must be aware about A1 and A2 milk.

Before we get into the science behind A1 and A2 milk, let me tell you first that here we are talking about two different types of cow milk.

After many kinds of research and testing, scientists have come to a conclusion that health effects of the cow milk depend on the breed of the cow. And nowadays, A2 milk is considered one of the healthiest choices for regular milk.

However, not all the scientist agrees with the fact that A2 milk is better.

In this article, we will just give you an overview of A1 milk and A2 milk, and from where these terms have originated.

Let’s dig in the historical science behind A1 and A2…

A2 cows are the old breed of cows; we can also say that desi Indian cows or African cows. These cows produce a protein in their milk along with amino acid (Proline). On the other hand, in new hybrid breeds of cows, amino acid or we can say proline is converted into Histidine (which is also a protein type) due to the modification of genes over the years. These hybrid breeds of cows are also known as A1 cows – Holstein Friesian, Ayrshire etc.

FACT: Casein alone makes about 80% of the total protein content

During the digestion process of A2 milk, proline is strongly bonded to BCM7, which prevents it from getting mixed in the milk of A2 cows.

But, in the case of A1 cows, as proline is changed into Histidine and Histidine shares a weak bond with BCM7, due to which it gets easily released in the digestive tract of animals, which later on gets mixed with the milk of A1 cows.

NOTE: When casein is broken during digestion process then BCM7 is released.

From all of this above theory, it is clear that BCM7 is not good for humans…

BCM-7 (beta -casomorphin-7) is an opioid peptide that is released during the digestion of the protein found in A1 milk.

Why is BCM7 harmful to humans?

A1 milk containing BCM7 is harmful to humans because it is not well absorbed by the human body, which later on triggers to serious health problems.

A1 milk consumption during childhood gives rise to the risk of some health problems, like Type 1 Diabetes, Heart Disease, Infant Death Syndrome, Autism, and Digestive Health.

However the research and studies are still going on to confirm these results, and the proven evidence is still too shaky to come to any conclusion.

Although there are many reports showing positive results of A2 milk, you must taste both A1 and A2 milk and stick to the one which suits you better.