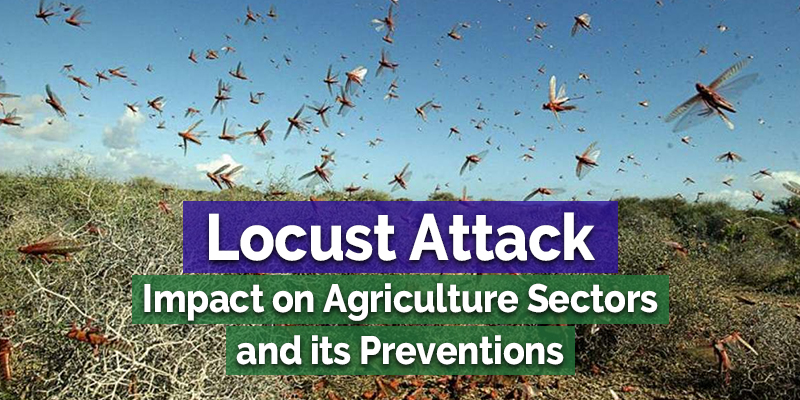 If there is one industry that is considered to be the most important for human sustenance, it is the agriculture industry. We need food to survive, and it is prepared with sheer hard work and round-the-clock commitment by dedicated farmers across the world. The sad part is that even after putting so many efforts, farmers have to rely on nature’s support for proper crop cultivation, along with keeping insects and pesticides at bay.

If we talk about the recent occurrence, swarms of locusts attacked several states in North India, destroying the crops at large and hampering the agricultural livelihood of many farmers in India. This locust attack is considered to be the most destructive one for 27 years.

Multiple precautions are being taken by the government to prevent this attack again and in other states. For this, multiple control rooms have been set across various districts/states, and the farmers have been asked to report any locust activity ASAP. In order to deal with the increasing locust attacks, a sum of Rs 1 crore has been sanctioned by the state government, and chemicals are being purchased by district agriculture officers at large. As per the Union Minister of Agriculture, in almost 14,000 hectares of vast crop fields in Rajasthan and Punjab, locust attacks have been controlled.

This has been achieved with a dedicated plan of action, with strict vigil maintenance by the agriculture officers. Apart from this, surveys will be conducted across Rajasthan and Pakistan borders to get to the root cause of the problem, and local farmers will be given spray pumps to fight the locust attacks.

What are Desert Locusts?

Desert locusts are recognized as one of the most dangerous migratory pests throughout the world. This is due to the fact that each swarm that covers a radius of 1 Km can contain approximately 8 crore locusts, whose appetite is such that it can destroy the entire crop field in less than 30 minutes.

The Impact on Agricultural Economy

Such types of locust attacks on the crop fields ideally lead to a Locust Plague phenomenon. This means that due to a heavy attack like this, the efforts being put in by the farmers in the entire crop season come down to zero.

Whenever such an attack happens, it puts farmers into thinking that their crops of ‘moong beans’ that are cultivated in the summer season would be destroyed and they will be facing huge financial setbacks. At this point in time, when the agricultural economy has already been hit by coronavirus severely, a blow from the locust attacks will lead to further financial disturbances.

The Effect of a Locust Attack on Crops

A Survey on the Locust Attack and Prevention in India

This initiative has been taken by the Locust Warning Organization that works under Directorate of Plant Protection, Quarantine and Storage, Agriculture and Farming Department, India. This organization is constantly working towards the prevention and elimination of locusts in various districts across Rajasthan, Punjab, and Haryana.

Under normal circumstances, the locust attack gets over by mid-September, but this time it has led to a prolonged effect. Locust insects got a lot of help from the changing weather conditions, resulting in continuous attacks.

As per the officers of the Agriculture Department, Rajasthan and Locust Warning Organization, Sri Ganganagar, a long monsoon period and uncontrolled airspeed were two primary reasons for locusts to stay back post winters.

When the temperature is 15-20 Degree Celsius, locusts start producing eggs. When the temperature starts increasing, it paves the way for a huge challenge in the near future, making the summer season tough for farmers, and Iran and Pakistan have already witnessed the same.

For prevention against such attacks, it is imperative to conduct a survey timely. To know the situation of locust growth in Punjab (Pakistan), Punjab Agriculture University’s chairman is in talks with Dr. Muhammad Ashraf, Chairman, University of Agriculture, Faisalabad, Pakistan.

As per a statement by Dr. Muhammad Ashraf, he also acknowledged the fact that unfavorable climatic conditions led to the growth and development of locusts, which in turn, resulted in massive crop destruction.

Locust attacks are surely very harmful for the crops and the agricultural community on the whole since they have an adverse effect on the economy directly. It is due to uncertain climatic conditions that have helped them sustain in the long run and cause crop destruction to such a great extent.

If you are a farmer who is looking for ways to prevent the crops against the locust attack but not finding an appropriate solution, you need not worry at all. The expert team of Apni Kheti is there to assist you. You can download the app or visit its website, and your queries related to locust attack prevention and other farming concerns will be addressed at the earliest. Contact us today itself!