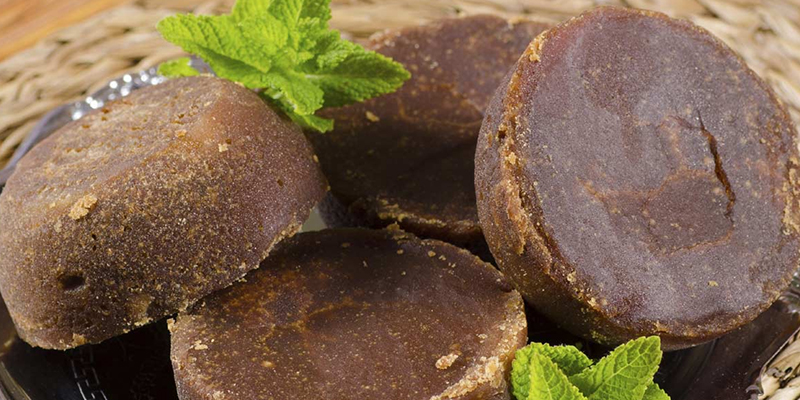 Jaggery is mainly for human consumption, and is used in making sweet items. It is also consumed in raw form. Jaggery is also used in making alcoholic drinks and Ayruveda medicines. Jaggery is majorly used in the food processing industry for confectionery items, toffees, chocolates, chewing gums etc.

Jaggery is a natural product of sugarcane and is good source of sugar. It is also a rich source of ingredients and vitamins. In India, 36 per cent of the total sugarcane production is used for preparing jaggery, due to which India contributes a total of 60% of the world’s jaggery production.

The technique of preparing jaggery is divided into four steps:

Juice extraction : The bottom 2/3 part of the cane should always be used to make the jaggery, because the amount of sucrose in the lower part is higher. The juice should be extracted within 24 hours after cutting and cleaning of the sugarcane. After extracting the juice, sieve the juice with a muslin cloth and remove the sugarcane particles and other useless items from the juice.

Cleaning the juice: After extracting the sugarcane juice, the second task is to clean it. okra is commonly used for the cleaning of juices. A dense solution of this is prepared for its use. Bark is soaked in water for 24 hours, then rubbing is done thoroughly with the hand and a thick greasy solution is prepared which is used for cleaning the juice. It helps to dissolve many type of unwanted substances, such as colored and other nitrogen-rich substances, from the extract. Use of this solution helps in distinguishing the fine particles of the jaggery and the impurities. One liter solution is sufficient for cleaning 100 liters of juice. In addition to this solution, certain chemicals such as super phosphate, phosphoric acid, sodium carbonate, sodium bicarbonate, etc. may be used.

Condensation of the juice: After cleaning the juice, it is poured to the boiling pot. After filling the pot with 1/3 of its capacity, it is heated at a slow heat to allow the juice to reach a temperature of 85 degrees Celsius. At this temperature, the nitrogen-rich elements and other unwanted substances from the juice start to rise on the juice as a foam.